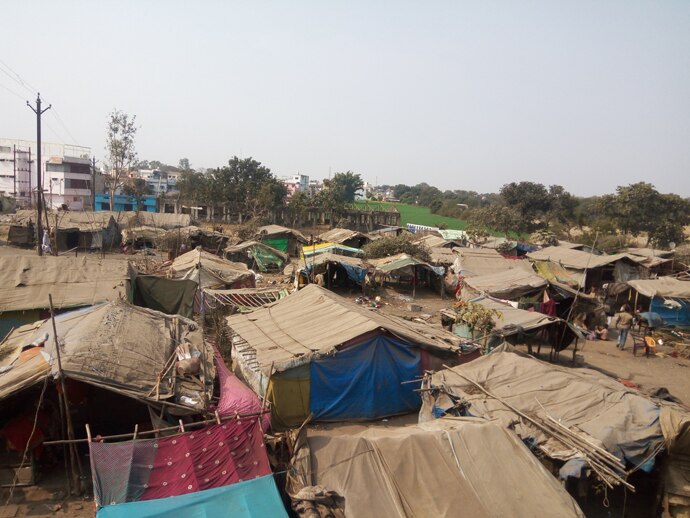 The past and the present of trauma

1871 was the birth of the horrendous Criminal Tribes Act imposed by the colonial regime for the purpose of creating a monopoly of trade within India and to curb the dissent of the communities that were becoming a threat to their rule. 2021 is the 150th year of this brutal act that branded almost 200 communities as ‘Criminals’. The people from such communities were consistently put under surveillance, barred with restriction of movements, and tortured as bonded laborers within the settlements that the regime had created to escalate the stigma of criminality around such communities.

After 150 years of this act, not only has their persistent struggle against the colonial regime been invisible, but the brutal treatment towards them has also escalated in various ways. The oppressors and the means of oppression might have changed but the scale of brutality has only escalated. Post-Independence there have been several commissions that advocated for the rights of DNT communities, but in terms of on-ground transformation in the social consciousness there has been an absolute absence of policy mechanisms to ensure any upward socio-economic mobility for them. Violations of their fundamental rights and violence of all sorts is being inflicted upon people from these communities till date. The mere presence of Habitual Offenders’ Act, 1952 provides legitimacy to the unjust and brutal treatment towards people from De-notified communities.

What seems like a ‘small matter’, but is rather a long formed biased consciousness

Traffic police catching you for not wearing a helmet or not having a license is common conduct. But the testimonies of youth from Kanjar community living in Berasia tehsil of Bhopal district states that when they were caught for riding without a helmet, they did pay the fine, but the traffic police on seeing their license and figuring out that they were from the Kanjar community, the couple of personnel started blazing out demeaning and degrading insults towards them. “Tum to kanjar ho, daru banate ho, chori karte ho…” and while saying these things very aggressively, they also slapped the youth. While it is a common thing to charge such fines, with people from the Kanjar community, there is the element of their respect being compromised. Not only is this a violation of their fundamental rights, but is also an outcome of an ingrained consciousness that sees the Kanjar community as ‘people who commit crimes’.

Similarly, two youths, Sohan and Uday from the Pardhi community in Bhopal were harassed by the police from Nishatpura region, allegedly because the police personnel were ‘keeping an eye on Pardhi people’. The youth said that it was morning and they were having tea at one stall and the police came and started interrogating them. On merely asking about the reason for the interrogation the police said “Pardhi ho, janta hun, chori karte hi rehte ho, to puchenge hi”. By no means did this statement have any legal or social justification. When Sohan and Uday countered this statement by asking the basis of it, the police got angry and started threatening them. He threatened them with false cases, and with ensuring that they do not get any work, etc. One of the personnel also gave a verbal abuse pertaining to the condition of Uday who is differently abled. At one point the police also attempted to use the rod he had, to beat one of them. Inquiring about the basis on which police are questioning is not anything illegal and neither does that call for such a treatment; but since they come from the Pardhi community, a de-notified community, the police personnel get this unwritten legitimacy.

Both of these cases seem like they ‘can happen with anyone’ but it is neither something momentary nor isolated, it is because of the ingrained stigma and biases that the police personnel across designations have. These cases are the ones that came to public knowledge because these youth were brave enough to counter this by writing an application addressed to SP, IG, DGP and Human Rights Commission. With people from De-notified communities, the demeaning of identity, typecasting them as ‘criminals’ (the entire community), etc. are everyday occurrences for decades now. It is now that the youth from these communities are emerging and indicating their willingness to counter this brutality.

Who’s the criminal when custodial violence is raging?

From November 2020 to March 2021, three custodial deaths among the Pardhi community have come to surface. The striking similarities in the pattern and the context in which these instances have taken place seem like an alarming situation that needs to be countered before any more deaths take place.

On November 10, Shankar from Sapera community (also a de-notified community) in Chouthiya village of Multai, in Betul district, who had married Bina from Pardhi community, was taken to police station without any warrant or complaint on his name. He was beaten up in custody and somehow he managed to escape in the middle of the night. For another 2 weeks, his treatment was going and then he succumbed to death. Not only did the entire police department of Betul tried to hide it but even tried to manipulate and bribe the wife of the deceased. When Bina was determined that she will not cremate the body until the FIR is filed; she was manipulated by the police, who made a report of unnatural death and gave it to her saying it was the FIR. Post the incident, Bina is struggling to get her FIR registered at least. She had even visited Bhopal and requested the Director General of Police to take the action. The DGP had given an assurance of CID inquiry which has started but apparently, even after 5 month of the incident, the FIR is still not registered.

In the month of December, Komal, a daughter of a Pardhi woman – Soina, from Ramganj Mandi in Rajasthan, was taken in an illegal custody by the police of Tonk district in Deoli region (where Komal and Soina, with few other Pardhi families had gone for collecting scrap) for some mobile theft. However, no mobile was found from her. When Soina reached the station to free Komal, she was kept there and hanged from the fan and beaten up. The next day when her condition seemed quite bad, the police went and kept her in the hospital in Deoli. From there Soina was taken to a hospital in Kota where she died within a week. Her daughter, Komal, was sent to Ajmer juvenile custody, the same day the police in Deoli had left her mother in the hospital in Deoli. Komal came to Ramganj Mandi on bail only after 4 days of her mother’s cremation. Even in this case, there has been no FIR registered against the police department. In spite of being an unnatural death, the hospital is also trying to cover it up by not providing the Post Mortem report (that is, if they had even conducted a PM).

In another incident that took place in Guna district of Madhya Pradesh, a 60 year old Pardhi person, Sheru, was picked up in the middle of the night by some 22 police personnel and beaten up, taken to police station. The trauma of this treatment on this elderly person meant that his condition was serious in the morning. After a couple of hours of treatment in the hospital, Sheru passed away. Once again, he was also picked up with no warrant. The person’s wife, Sunita was also taken into custody for the charge of selling liquor, just a week before this incident. Shanti5 who is Sheru’s daughter claims that neither was the charge on her father true, nor is the charge on her mother. However, it is a difficult place for the family to be in, where they do seek justice for their father but also want their mother to be released, who is falsely implicated, and don’t want to risk angering the police in a way that they will not release her.

In all these cases, there have been patterns of wrongfully taking the people from De-notified community in custody and then torturing them with monstrous treatment till the point that they are on the verge of dying, put them in hospital and then deny that they ever brought anyone to the police station, let alone the people being tortured brutally. The sudden death of the people and the family claiming it to be the result of police violence hardly gets any attention even though it is the objective truth.

Instead, the police in contradiction to this get legitimacy to their actions and justify the same on the basis of the prevailing stigma of criminality among the communities. In one of the cases in Guna, a police personnel over there even stated that there would not be a single Pardhi, who is above 18 years of age and not have a case against him or her. The problem with this statement is that it stigmatizes the entire community as criminal and reiterates the branding of DNT communities as ‘criminals’. The conviction rate in the cases is not considered, let alone the face that some of the cases are inflicted on the community wrongfully to fetch bribes from them.

Be it a violation of right to inquire about the interrogation or be it a wrongfully taking someone in custody, brutally beating them up (irrespective of the fact that the charge on them is true or false) and then covering it up; all this and more has become an everyday reality of people from Pardhi community. For the Kanjar community who is also a de-notified community like the Pardhis, the situation is almost the same.

In the month of November in 2017 a woman, Indramalbai from the Pardhi community in Bhopal had to burn herself and take her own life after continuous torture and harassment from the police. It has been three years and the family of Indramalbai is determined for availing justice of Indramalbai’s instituional murder. It took 3 years for the family’s struggle to get the FIR filed against the accused police personnel; when CBI took up the inquiry on High Court’s order and reported the accused police personnel for abetment to suicide and concealing the evidence. Although a small success, this does give immense hope to Indramalbai’s family. But, the on-going cases and the escalation of its frequency are making the condition of the community even more vulnerable.

After almost 150 years of the Criminal Tribes Act and almost 70 years after the Habitual Offenders’ Act, the collective callousness of the police department has been the same and that has been hampering the lives of de-notified communities in significant, unimaginable ways. The trauma that they live with has kept them away from almost all socio-economic mobility. The entire set-up of the police department and the continuous torture inflicted by them on the communities makes them the criminals and the ones violating the laws. This urgently calls for a sensitization of the police department and at the same time greater efforts are needed to transform the social consciousness and the psyche amidst the larger public that currently continues the stigma of criminality.

Heman Oza is currently based in Bhoapl district of Madhya Pradesh and working with an organization called Muskaan that works alongside people from De-notified Communities.

The author changed the names of the living people, however the original names of the deceased, due to violence, have been kept intact.

Thanks to Shivani Taneja, Ragini Lalit and Dhruva Desai for the help in reporting. Urban Adivasis of Bhopal Left to Struggle as Pandemic Rages