By SHIVANI TANEJA and RAGINI LALIT

The death of an eight-year-old boy in August due to the physical violence inflicted on him by a savarna teacher because the child simply touched a pot of water at Saraswati Vidya Mandir, a school in Rajasthan’s Jalore district, speaks volumes about what the children of the marginalised sections of our country go through in educational institutions.

This was no isolated incident. Soon after, it was reported that a 13-year-old boy of Pandit Brahmadutt Uchchattam Madhyamik school in Uttar Pradesh’s Shravasti district was brutally thrashed, allegedly by his teacher over the delayed payment of fees, which later resulted in the child’s death.

In the midst of the ongoing talk about big overhauls and transformational reforms in school education through digitalisation or the National Education Policy (NEP), these brutal incidents remind us that we need to urgently examine what it is that we refer to as ‘education’. Are these the ‘schools’ that our children need to go to?

These incidents brought back many memories of children sharing such spirit-breaking experiences of school. One that we share here was where one of the writers was present herself. In 2003, as part of an NGO effort to enroll children in mainstream schools, the writer had visited the neighbourhood government school (in Madhya Pradesh’s Bhopal).

We had been supporting these children, who were involved in scrap-picking, in their studies as a non-formal educational endeavour and were naively hoping that things would change, and that life would open up for them when they became a part of mainstream schools.

But we stood there (the children, their hopeful parents, and us) as the school principal called the police. The principal had been dissuading us from the admissions and we had come back to the school – equipped with all the possible documents and information which could become an excuse for stalling the admission – when the school staff, supported by the police, demanded of us, “How dare you try to enroll Pardhi children in the school?”

Pardhis are one of India’s many denotified tribes (DNT) and nomadic tribes (NT) that carry the colonial-era stigma of being habitual criminals.

Hardly Any Changes Even After 75 Years of Independence
Today, 75 years after independence, and 19 years after that experience, we are still seeing the same things. While a school would not openly refuse an admission, and corporal punishment is formally banned, the attitudes of those in power manifest themselves in various forms and the children are quick to sense it.

Countless studies over time have elucidated the experiences and perspectives of children from marginalised communities in schools.

A 2014 study by Human Rights Watch (HRW) details the forms that exclusion and discrimination take in schools. It mentions numerous instances of children from vulnerable communities being abused, called derogatory terms, expected to clean toilets, or made to sit separately.

The Exclusion and Discrimination Study of the Experiences of Dalit Children published by the Indian Institute of Dalit Studies, Delhi, in 2009, or the study conducted in Dewas, Madhya Pradesh, by Jan Sahas, a community centric not-for-profit organisation, have similarly exposed the everyday pervasive nature of discrimination faced by children in schools.

Casteism in Literature
Similarly, Tamil Dalit writer Bama’s stories may appear to fall in the category of fiction, but they draw from her experiences of being a Dalit school teacher and depict the realities of Dalit children in schools that try to maintain the hegemonic status quo.

In a story titled The Verdict, a teacher is troubled when she sees a Dalit girl scolding her younger sister for venturing towards a tube-well situated in an ‘upper’-caste area.

Expecting the headmaster to speak of equality and abolition of caste, she takes the matter to him but is surprised and disappointed when she finds that the headmaster merely clarifies that the girls should not drink at upper caste homes, but that drinking from community taps on the road is permitted.

The HRW study and other reports have also brought up various instances of Muslim children being targeted by peers and teachers in mainstream schools.

One needs to only look at the news to see the dangerous intersections of educational institutions with rampant Islamophobia – from openly humiliating Muslim students and singling them out, to the forced removal of the Hijab.

The decade post the Right to Education (RTE) Act brought almost all children under the scanner of the Education Department, raising gross enrolment levels to over 100 percent in primary classes. Subsequently, the focus shifted to children’s learning levels.

For years, we have been blaming the children and the communities they come from for the low learning levels by calling it a problem of the first-generation learners. Low family income, illiteracy, unawareness, and child labour are listed as hurdles, but these are the realities of a majority of our people.

It is quite a disappointment that those committed to education of the marginalised communities have reduced education to being able to read and write.

Our think-tanks only talk about foundational literacy and numeracy skills rather than reviewing the interpersonal interactions within the school, or the ways in which equity and inclusion is practiced in schools.

Our reports, data, and funding are anchored on children learning to read and write. It is high time we stop equating quality with these minimalistic skills of literacy and numeracy alone. Education is not exclusively about A, B, C, D.

‘Tribal Children Come to School to Eat and Not Study’
A government primary school’s principal told the HRW survey team that the tribal students are a “big problem,” “their main aim is to come and eat, not to study,” and “just see how dirty they are.”

As seen in the school in Jalore, there is no doubt that other children of the boy’s community do not find themselves wanted and loved. They are discriminated against and unwanted because of the caste they belong to.

Be it schools in Kanjar villages in Bhopal district or schools in Madia Gond villages in Chhattisgarh’s Bastar or the Rashtriya Swayamsevak Sangh-run Saraswati Vidyalayas or the high-end elite schools with students in EWS (economically weaker sections) quota – the message that goes to these children is clear that they don’t need to be a part of school spaces.

Systemic injustices perpetuated on members of marginalised communities, Dalits, Adivasis, Denotified and Nomadic groups, Muslims, and other minority students, for decades, impacts the entire community on a daily basis. Laws may be brought in to restrict certain behaviours but the disregard for human life, for a child’s emotional, and physical well-being persists. A child’s death, a murder, is an indication of this widespread cruelty. Unless schools are directed to overcome this, we continue to feed this system.

Schools must create spaces for discussions on marginalisation and discrimination. They must support children in learning to value themselves and move away from internalising the supremacy of the privileged.

Encouraging these conversations would generate meaningful relationships between children of different social and economic backgrounds, which are crucially needed to be part of every child’s school life.

(Shivani Taneja is a part of the education team of Muskaan, an organisation working towards meaningful education within vulnerable communities. She can be contacted at shivani@muskaan.org. Ragini Lalit is a part of a research group at the School of Education at Azim Premji University. She is currently working as a teacher at Muskaan. She can be contacted at ragini.lalit@apu.edu.in.) 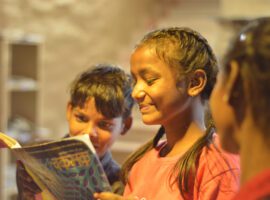 Stories for a More Humane World